To God be the Glory!

Prayed for a woman in a wheelchair today who had several surgeries on her knee. The presence of the Lord touched her and her knee got hot! She raised her hands in praise and thanking God in front of the mall for His healing. Hallelujah Jesus!

"The HOLY SPIRIT and the ARTS"

"The HOLY SPIRIT and the ARTS--

Those Who Know the CREATOR will be the Most Creative People on the Planet" "We will soon see artists create paintings that will come straight from the throne room of God. By looking at them, people will receive an impartation of deep prophetic vision and a Heavenly perspective."

Paulette Reed: The Birthing of Miracles - Prepare to Deliver the Dreams of God

During 2010, I believe we will see the multiplication of the miraculous works of God. As He raises up a great company of women (Psalm 68:11), He is also bringing men alongside, so spiritual procreation and
the birthing of dreams will be naturally supernatural.

Jesus came to give life...abundantly, and life is created by division and multiplication. When a baby develops, the cells divide and multiply to form "the dream." Even Elohiym divided Himself, so He could…

HOPE TO THE HOPELESS!!

"Your life will amount to nothing!" they saylock her up and throw…
Continue

Pregnant with His Promises 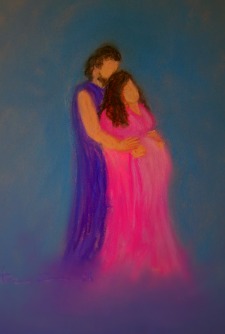 A couple of weeks ago I prayed and saw the Bride pregnant. But, I had to
wait until God said it was time to paint it. Yesterday all of a
sudden, it was time. I went into my studio and lifted my hands and
then I was "there". I was pregnant, my hands were on… Continue

I was on my way to bed, but felt led to go and paint. I think this is the title..."A Family's Love".
The image first…
Continue

DAUGHTERS OF ROYALTY WOMEN'S CONFERENCE is Saturday, September 18, 2010 at Church on the Hill, 210 Locust Dr., Vallejo CA. This is a prophetic art, worship, and wellness conference. Foods, art and wellness activities, art exhibit and gift buying available. Pre-registration is encouraged and ticket buying will follow so......on. Please post questions on DOR's facebook group or email at…

Here is a link to theie services and worship services at Morning Star : )
http://morningstartv.com/content/weekend-services

There is some GREAT worship at this site if you ever want to check it out.
This is their Sunday morning worship : )

LOOKING FOR OTHER'S IN THE BAY AREA CALFORNIA

BLESSING TO ALL, IAM LOOKING TO CONNECT WITH OTHER'S IN THE BAY AREA CALFORNIA, THANKS REBECCA PURCELL

New Vision of the Bride - Going into His Chamber

It is in the secret place of intimacy with the Lord that He impregnates us with His purpose. He overshadows us like He did with Mary and we become one with Him. One in Spirit, purpose, desire, life... I prayed for a woman in November and this was the vision I saw. I said to her, you are a writer? And she said, "yes". I said, "the Lord wants you to come into His bedchambers because he is going to give you things to write in that place of intimacy with Him." I told her that I saw the Glory coming… Continue

In His Lap, Surrounded by His Glory

This Christmas has been different for me...and a struggle financially. But people started giving me gifts of Gold, so I knew God was speaking to me…

The first gift I received was a bottle of anointing oil called Glory, mixed with Acacia wood, and saffron to represent Gold. (http://www.hegai.org/elegant_bottles.html) When I shared it with a friend, they said, smells like Frankincense.

Another was a beautiful gold… Continue

As you walk in the Holy Spirit His gifts and directed talents begin to sow the way to see in to the true realm of God Almighty. Art is a was to focus on a maximum or doctrine. Like the seven churches or the seven observational gifts. in teaching Special ED kids and bad boys truths i became aware they needed more than words and songs. In Sunday school we began to use visual aids in memorizing the books of the bible by each book had a theme so the picture like numbers became people looking like… Continue